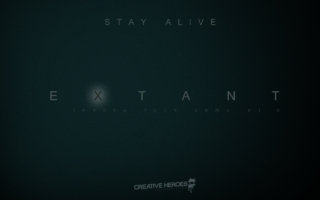 Extant is a free-roaming survival audio game, completely based on sound.

We released a tech demo for Extant in October 2010, a few days prior to Halloween. The demo allows players to wander freely through an atmospheric, monster-infested world, exploring sites and buildings while fighting off zombies and collecting pickups such as ammo and medicine.

Extant is based on concepts developed back in 2002 for an audio game prototype named “Dark – A Garden Wander”, created by Sander Huiberts, Richard van Tol and Hugo Verweij. One example of such a concept is Moby, the protagonists dog, who can guide the player to certain areas and objects using an innovative command menu.

Through this tech demo we explore the design possibilities of an audio-only game space that is intuitive, immersive and easy to navigate. We found that a space based on spheres meets such requirements best. For example, players wander around on a spherical-shaped world, in a fashion similar to Mario on a small planet in Super Mario Galaxy. This approach frees designers from having to add spatial obstructions in order to constrain the players’ free movement to a specific area. Spatial obstructions can be quite a design challenge in audio games, since walls are usually silent and one does not want the player to constantly bump into them. Each building and site is circular as well, allowing the player to enter from any direction.

“Okay. This demo shows me one important thing, If someone wants, can do a great audio game, with great engine and excellent sounds, and effects. For every developer, this is good example for you how the game must looks. This is first FPS game which is totally understandable for me and totally fantastic. Amazing sound effects, backgrounds, and voices. Guys, keep developing it, this is the really suprising project, and more projects like this one.” — Lirin (AudioGames forum)

“I found out that you start out with 30 ammo, use poke to give yourself more if you want, remember that when you get more ammo your counter starts back at 30 also after you kill whoever is in the bathroom, there is always a health pack, absolutely love this game!!!!!!” — Nikos (AudioGames forum)

“Love love love this extant-game. I’m told, but still very fun. […] I’m assuming it will be a smash hit with more time and development. Very nice already, and a very good soundscape. The zombies scared me right out of my pants. Yikes!!” — Orelia (AudioGames forum)

The Extant tech demo can be download for free through the following links: