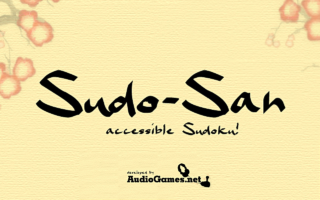 Sudo-San is a blind-accessible version of the popular puzzle game Sudoku.

Sudo-San is an accessible version of the popular puzzle game Sudoku. Sudoku is a logic-based placement puzzle which aim it is to enter a numerical digit from 1 through 9 in each cel of a 9×9 grid starting with various digits in various cells. Each row, column, and region must contain only one instance of each numeral. Completing the puzzle requires patience and logical ability.

Sudo-San is the first online accessible Sudoku that features a graphical interface and an extensive auditory interface, enabling blind players as well as sighted players to play Sudoku.