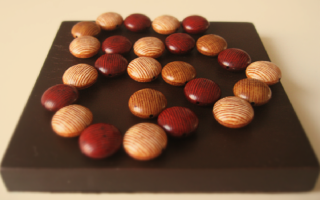 A game to remember, for two players.

Moments to Memories is a game designed as a farewell gift for two Japanese friends of ours. The gameplay revolves around trying to beat your opponent in memorizing as many details of special moments shared together. The goal of the game is to take time and revisit memories with loved ones, friends and family. When the game has finished, the filled board can be used as a mantle piece reminder. Here are the rules:

Moments To Memories – a game to remember, for two players

How to play
The aim of the game is to share memories of moments. At the start of the game, each player receives ten Memories of the same color. Place the Stage and the five Moments in between the players.

When a player runs out of memories of the moment, or if a shared memory is flawed, he or she may not place a Memory. Instead, the player draws a new Moment and places it on the Stage, touching the previous Memory.

The first player to place all of his or her Memories on the Stage wins. When a player has no space on the Stage to place a Moment or a Memory, the other player wins.

Life is made up of meetings and partings. That is the way of it.