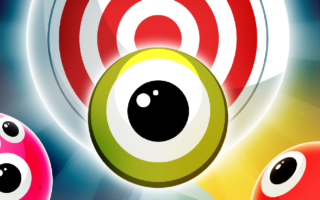 Free the Gluddle from The Supervision in this eyecatching oddball bouncy game for iPhone and iPad! Oi!

Aim and shoot springy globular characters called Gluddle in this eye-catching oddball bouncy game for iPhone and iPad. Freeze them in mid-air to help other Gluddle bounce about and defend their privacy and freedom from the evil eyes-in-the-sky…The Supervision!
It’s pinball meets trampoline, it’s Peggle meets Angry Birds, it’s a totalitarian invasion eye-to-eye with a resilient resistance.

Players are to clear Supervision-invaded levels by bumping Gluddle against the spying mechanical eye balls (nicknamed ‘bullseyes’) afloat in the sky. The gameplay revolves around launching Gluddle and freezing them in mid-air, thus creating paths and boundaries for succeeding Gluddle to bounce upon. The Supervision fights back by taking snapshots that flash and freeze every Gluddle that comes near. There’s no limit to the amount of Gluddle that the player can launch but he or she is awarded colorful medals if the level is completed within a certain time limit or below a certain number of Gluddle.

The levels of Gluddle are intentionally designed to create short, casual play moments. Due to its openness and randomness the game has an accessible, toy-like character and can be played by players of all ages. Many actions and events, such as explosions and Supervision animations, are precisely synchronised to the tempo of the synthetic, adaptive polka-beat, creating a continuous flow throughout the game.

While the underlying themes of the game refer to topics such as today’s privacy problems and government control controversy, the main sentiment of the chaotic Gluddle and the orderly Supervision is really about loosening the reigns of life a little. To try and not be too serious and controlling, because it will freeze you up. Instead be colorful and cooperative, and let life take you to unexpected places. You will be amazed where you might end up!

“There truly is no other game quite like Gluddle.”
— IndieGameMag

“The eyes have it!”
— Eurogamer App of the Day

“Gluddle made me laugh. Several times. Out loud. (…) It’s a puzzle, a physics game, and there’s a lot to figure out, and the thing is, you can’t lose, and it makes you laugh.
— Majorfun.com

“Gluddle, which is one of the most addictive physics-based iOS games I’ve come across, has just been bumped to version 2.0. In its initial state, Gluddle is already a fantastic physics puzzler. But now, in its updated version, the game is even more so.”
— AppAdvice

“Gluddle is a fantastic, creative game that doesn’t just copy the mechanics of other puzzle titles, it takes them, mashes them together, and pushes them farther than they have been previously, and has had some great support through updates from the developers. For that, it’s definitely worth checking out. It’s one of the best iOS puzzlers I’ve ever played.”
— TheAppShack

“Lots of physics-based knock out games will really raise your blood pressure (Angry Birds and Cut the Rope are notorious for this). For some reason, Gluddle doesn’t do this. It’s mellow.”
— BestKidsApps

“It’s like throwing a bouncy ball very hard indoors and seeing what it smashes. Fun, in other words.”
— Games Asylum

“When George Orwell sat down to write dark dystopian novel Nineteen Eighty-Four, he couldn’t have known that he would one day inspire Gluddle, a physics-based iOS puzzler where you dislodge spying Big Brother-style eyes in the sky.”
— Eurogamer App of the Day

“I love creative and original games that stand out from the overcrowded App Store and Gluddle is definitely strange yet original. Gluddle is a well-polished puzzler that’s perfect for gamers of all types and ages. What I really loved the most besides the charming graphics is the innovative sound in the game. The music system responds to what’s happening which keeps players entertained as they try to use different tactics to take down the Supervision. The sound effects are often humorous as well. Gluddle is a solid title. This hidden gem is packed with amusing gameplay, impressive music and colorful graphics that make it one of the top physics-puzzler games in my book.”
— Apps On Tapp

“That game is confusing, obscure, weird and has a soundtrack that is almost annoying. Played the demo for a couple of minutes, fell in love with it and bought the full version. Great job, and great game!”
— ZombieGorilla

“Its Polka style music and easy game flow is intended to make the players feel they can relax and not take everything so seriously all the time. There is, however, an obvious undertone of anti-Political propaganda, considering that players are fighting against ‘Big Brother’ and privacy invasions. This little game seems to have potential.”
— Active Respawn

“When George Orwell sat down to write dark dystopian novel Nineteen Eighty-Four, he couldn’t have known that he would one day inspire Gluddle, a physics-based iOS puzzler where you dislodge spying Big Brother-style eyes in the sky.”
— Eurogamer

“There truly is no other game quite like Gluddle, because it takes a variety of existing gameplay mechanics, rolls them into one and hands it to you as a new, innovative title. In the end, the game gets away with it because of the fact that while the gameplay mechanics are indeed drawn from other sources, they’re executed in such a way that hasn’t been seen before.”
— IndieGameMag

Gluddle was nominated for the Control Industry Award Nominee for Best Dutch Game 2012, out of 144 games. Gluddle won the Major Fun Award and was selected both Eurogamer App of the Day and Kotaku Gaming App of the Day. A standout achievement of Gluddle is the innovative use of sound in the game. It uses an adaptive music system that not only responds to what is happening in the game, but even controls part of the gameplay. Many events, such as the flashing of the Supervision, are timed to the beat of the music. This creates a musical flow that immerses the player in the game and allows for special tactics to be used, if the player pays a close ear.

Gluddle also features a novel game mechanic: launching a projectile and then freezing it in mid-air to create a bouncing surface for concurrent projectiles. This mechanic, which was originally developed back in 2004 for a one-switch platform construction game for gamers with a physical disability, makes this game stand out as a real original!

The soundtrack for Gluddle has been performed live on two Indie Game Concert events.

Visit the Gluddle website (slide accessible for iPad or iPhone!).

Go to Gluddle in the Google Play Store.