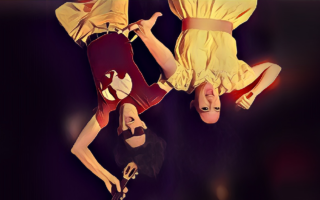 Da Veranda produces groovy mellow beats accompanied by a velvet voice singing catchy melodies without lyrics. Their songs can help you de-stress from the world that’s full of words and talk, because as Jobim said in his one note samba “there’s so many people that just talk and talk and talk and just say nothing, or nearly nothing” and slip into a universal global world without lyrics where everybody can understand everybody, or to quote Stevie Wonder “music is a world within itself with a language we all understand.”

The album “Out Of Your Roof” consists of eleven songs in various styles and combinations, from tango to mambo, where occasional boogaloo meets balkan, while dance is mixed with reggae, a Brazilian groove is merged with Colombian cumbia and a smooth jazzy atmosphere dissolves into gospel. All songs are accompanied by deliciously contagious and harmonized vocals bringing a positive vibe to mankind!